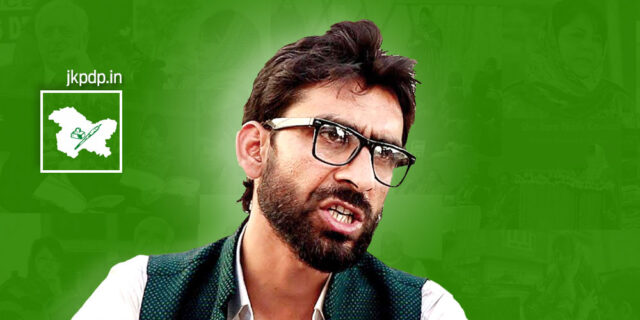 Jammu, Sep 30: Terming Gujjar and Bakerwal community an inseparable part of the J&K’s political, social, and linguistic milieu and identity, PDP leader Talib Hussain Choudhary in a statement issued here said that a concerted attempt is being made towards exclusion of Jammu Muslims.

“Assaults are being made on our identity and existence through a sustained and communally designed campaign. Historically, Jammu has already witnessed a demographic engineering in November 1947 when the Muslim Majority character of the region was altered within a fortnight. History teaches us what has happened in the past can possibly happen again. To thwart communal designs to disarm the Gujjar community politically, electorally, linguistically and culturally, all assaults have to be resisted,” said PDP leader Talib Hussain Choudhary.

Talib said that J&K is the only region with cultural and linguistic diversity, and added that it is being manipulated in J&K and sold politically in mainland India. We strongly condemn the marginalization of our language and disempowerment of Gojjri by the present regime.

“This onslaught is not just characterized by the marginalization of languages that inherit the Persian script, it hugely underplays the importance of inclusion of languages like Gojri, Pahadi and Punjabi which are extensively spoken in J&K,  he said.

It is pertinent to mention here that the 2011 Census recorded 12,27,901 speakers of the Gojri language and this language is prevalent among tribal populations in both Jammu and Kashmir valley and finds no recognition with the government  parameter of inclusion as an official language.

Talking on the plight of Jammu Muslims, he said, that Muslims of Jammu region have historically shown resilience. Muslims, that today constitute 33.5% of the population in Jammu, had been specifically targeted in the massacres of partition, killing thousands of them. However, over the years, Jammu had risen against the might of communal forces and developed as a symbol of secular unity.

“Unfortunately, this unity is now under serious threat due to the nefarious designs of the right-wing goons and its allies. Secretly under the nose of the BJP, changes are being suggested to the demographics of Jammu and selective targeting of Gujjars and Bakarwals is taking place, who are the third largest ethnic group of the State and largely Muslims,” said Choudhary.

Lamenting the fall of PDP led government as very unfortunate for Muslims of Jammu, Talib said, that in July 2018, after the collapse of the government, eviction notices were served to many Gujjar families in Jammu and as of December 2018, an anti-encroachment drive against Gujjar families in Jammu was initiated. This, despite a directive passed by the former CM Mehbooba Mufti in February 2018 that tribal community should not be disturbed or dislocated till the time the state government can formulate a tribal policy & if at all such an eviction was necessary -the directive stated – it should be done after consulting the tribal affairs department.”

Reminding the powers that be about the role of Gujjars and Bakerwals in times of wars as front line guards, he said that Gujjars and Bakarwals have always contributed to the efforts of the state whenever the need arose. Now they are being treated as enemy informers.  Also, since they rear cattle including bovines, they are targeted on that ground as well. Being the largest section of the original Muslim residents of the state they are perceived as outsiders by the right-wing extremists, he said.

“PDP has always sought extension of the Forests Act to Jammu & Kashmir to strengthen the land rights of tribal communities. However BJP has been vehemently opposed to this idea clearly to prevent recognition of rights of trials and further push them into poverty and alienation, “he added.

Lauding the contribution of the nomadic community to the economy of Jammu & Kashmir that cannot be overlooked, Choudhary said, that 60% of the state revenue is generated by agriculture and animal husbandry. Even within the three divisions of erstwhile J&K state, Jammu accounts for maximum amount of sheep and goat livestock, rearing which is the primary livelihood of the nomads. While reaping benefits as a state from their livelihood, we cannot selectively overlook their targeting and marginalization.” he added.

Underlining the threat to Jammu Muslims as a grave concern, he said, that the Muslims of Jammu are being openly threatened with situations like the partition by senior members of BJP and communally motivated campaign such as “Ikk Jutt Jammu Maha Adhiveshan (The Save Jammu Crusade)” are being organized that reportedly talk about the dangers posed to the people of Jammu from the growth of Muslim colonies in and around Jammu and how it is a concerted effort to change its demography. These are reflective of the mindset of the perpetrators of bigotry.” added Choudhary.