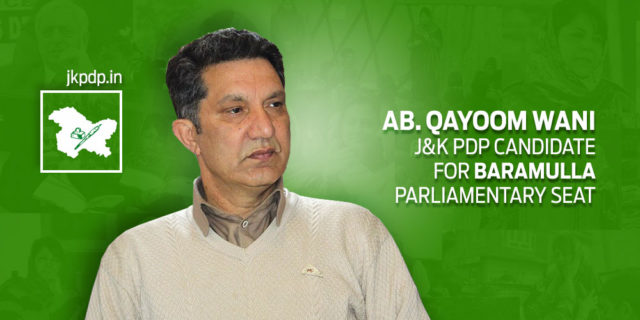 Senior PDP leader and Former Minister Naeem Akhtar has said that victory of PDP’s Candidate for Baramulla Lok Sabha Constituency Abdul Qayoom Wani will be a compliment for thousands of teachers, middle class and  low paid employees of the state.

Interacting with party functionaries, workers, activists and supporters, Akhtar said that as a teacher Abdul Qayoom Wani dedicated his life for the spread of education in Jammu and Kashmir and guided the teaching fraternity during the tough ordeals in the state.

Acknowledging the contribution of teachers in spreading knowledge in the state, Akhtar said that it is due to the earnest and selfless efforts of the teaching fraternity  that in spite of the trying circumstances Jammu and Kashmir became hub of knowledge and education.  He added that it is due to the hectic efforts of the teachers that the state at present has the distinction of having 67 percent literacy rate.  “It will be a great day for the knowledge sector of the state when Abdul Qayoom Wani goes to the parliament. He will not only become the voice of the state but of all sections of the society.  His election as the leader of the teaching community also is the  reply to those who want to divide Kashmir community into various classes and sects,” said Akhtar.

The PDP leader added that teacher benefits everybody and students of all sections irrespective of their cast, creed and colour, sectarian allegiances. “Victory of Abdul Qayoom Wani will be a message of unity and inclusiveness from Kashmir. Every person who has a dream to see Jammu and Kashmir a hub of knowledge, wisdom, harmony and tranquility must vote for Wani,” Akhtar said.