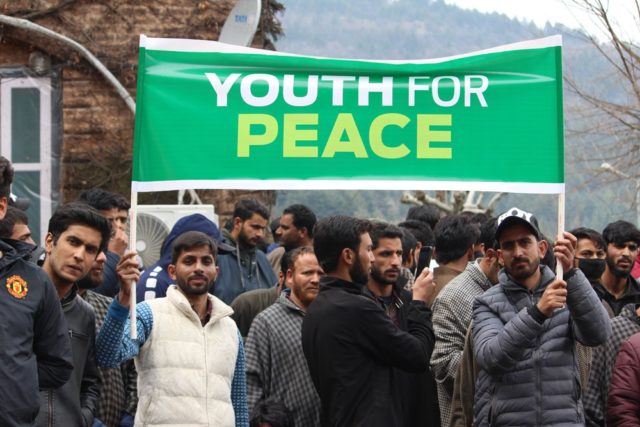 Former Chief Minister and Party President, Ms Mehbooba Mufti said on Sunday that chocking democratic space and punishing people collectively is, unfortunately, a new policy adopted by the Government of India to deal with Kashmir.

Addressing the youth convention here in which youngsters in thousands took part, Mehbooba said that purpose behind the repressive measures being taken by the BJP led government in Jammu and Kashmir is to show the electorate how tough is the saffron party against Kashmiris.

Referring to  the ban imposed on JKLF and Jamat-e- Islami, Mehbooba said it is ironical that on the one hand  government of India is claiming to have launched a rehabilitation scheme by which the militants who lay down arms  will be encouraged to join the mainstream and on the other hand, organisations like JeI and JKLF  are banned which have avowedly rejected violence as a method of achieving any goals and have distanced themselves from it.  “JKLF is committed to resolution through political means while as the Jamaat-e- Islami is a religious and social organisation running schools and orphanages across the state. Such repressive measures will shrink the already limited space and will only increase the level of alienation and frustration among the people,” Mehbooba said.

The PDP chief termed present elections crucial in determining the future course of history. “We are at a stage where there the people of the state are facing more challenges than ever. As the largest political party of the state,  we have always strived for the resolution of the problems through peace and empowerment of people. Whether we were in opposition or in government, we have established the idea of Mufti Mohammad Sayeed of having a party with peace, dialogue and end of repressive measures as a prime agenda. But the challenges at present are in different forms.  People are knowledgable enough to know what are the threats and the stakes involved,” she said in her address.

Mehbooba said that the PDP is seeking resolution of problems through the democratic process and there is already a common space on which we can work and on which the people of Jammu and Kashmir are united. “It is more or less around the agenda of the PDP which includes  opening of roads across the LOC, safeguarding special status of Jammu and Kashmir, fulfilment of constitutional commitments, utilisation of state’s water resources for the benefit of the state, establishment of joint council between Jammu and Kashmir and Pak administered Kashmir so that matters pertaining to trade, tourism, commerce, natural disasters, global warning are jointly taken care of,” said the PDP President.

She says PDP is firm in its belief that resolution of Jammu and Kashmir problem is possible if both India and Pakistan leave their ego for the betterment of the largest human mass residing in South Asia and same can be achieved by addressing the aspirations of the people of Jammu and Kashmir and also while safeguarding the integrity of both the countries.  “A very positive beginning in this regard was made in the past, however, subsequent governments didn’t pursue it. Kashmir is now facing worst turmoil and unfortunately, the present government thinks that the issue can be resolved by enforcing the peace of the graveyard, squeezing spaces of dissent and dialogue and banning organisations. Such steps can be very dangerous as established by recent unfortunate bombing in Pulwama which almost brought the two countries to the brink of a nuclear war,” Mehbooba said.