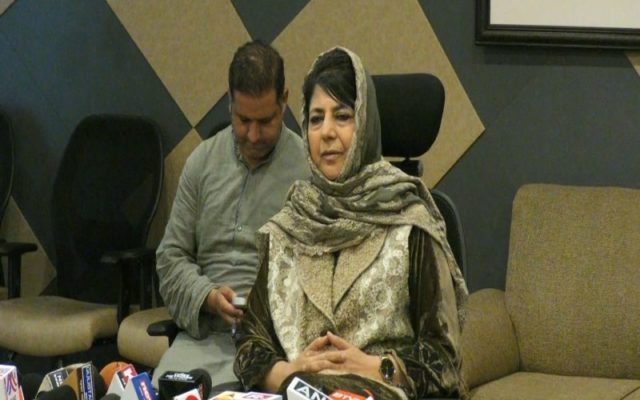 Srinagar, May 4: People’s Democratic Party (PDP) President and Former Chief Minister Mehbooba Mufti has urged Government of India (GoI) to announce Ceasefire in the state during the auspicious month of Ramazan.

Addressing a press conference here, Mehbooba asked GoI as well as the militant leadership to respect the religious sensibilities of the people of state and give them a sense of relief through ceasefire.

“Ramazan is a month of peace, compassion, prayers & seeking forgiveness. It is incumbent on everyone to contribute towards creating a sense of relief for the people of violence ravaged state during this month,” she said.

“I urge the GoI as well as the militant leadership to respect the religious sensibilities of the people and observe ceasefire during the holy month of Ramadan’” she added.

Recollecting how a Ramazan Ceasefire in 2018 had given much needed relief to the people of the state, Mehbooba emphasized the need of repetition of similar gesture in order to give people sense of peace and security in the holy month.

“We have seen a muscular and military approach of the government gaining momentum in the state for some time now. Such an atmosphere of curbs, confrontation and harassment must go in order to give people relief in the auspicious month like we had done during last Ramazan,” She added.

Flaying the government for its coercive policies against the people of the state, Mehbooba asked for an immediate end to the crackdown unleashed in Kashmir.

“People are being pushed to the wall as the space for peaceful democratic dissent is being chocked. This is bound to have undesired consequences,” she said.

“Hundreds of youth have been detained in south Kashmir over last few days. When an ordinary kahmiri is subjected to such harassment, how does this approach translate to Insaniyat and Jamhooriyat and how are we paving way for the reconciliation,” she added.