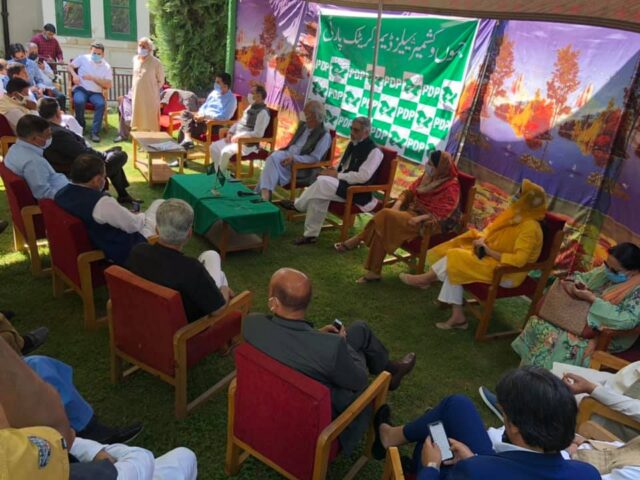 Srinagar, 21 Sep. 20: Peoples Democratic Party (PDP) held a full session of its seniors and party office bearers for the first time since August 5, 2019, at its party headquarters as the leaders were allowed to step out of their residences after over a year.

The meeting observed that while on one hand, the internal situation of the state is very precarious, the situation at LOC & LAC is also on the boil. Therefore, in the meeting, it was resolved that the party would continue to fight for resolution of the basic issue and advocate dialogue and reconciliation with all the stakeholders, as envisaged in the roadmap of our party which has become even more relevant today than ever before. Party will continue to work for accomplishing the vision of our great leader Mufti Sb, who envisaged that Jammu & Kashmir has to become a bridge of peace rather than a battlefield in order to achieve everlasting peace in the whole subcontinent.

During the deliberations, it was observed that post august 5, 2019 false semblance of normalcy is being created which in fact resembles the peace of the graveyard.  People are still shell shocked and unable to come to terms with what has happened. The situation has created a kind of a stalemate where nothing except all kinds of anti-Kashmiri steps like domicile laws etc are being pushed in a hurry. These steps are further adding to the anger and frustrations of people, whose resolve to fight this injustice gets stronger with time.

Party while fighting for every inch to restore the dignity and rights of people that were snatched illegally from us, would continue to struggle for the resolution of the larger cause of J&K under the uncompromising leadership of Mehbooba Mufti.

It was resolved that the party demands the immediate release of all political detainees irrespective of their political ideology, whether lodged in Kashmir or outside.

The meeting expressed deep anguish over the recent spree of the killing of innocent people from Shopian to Sopore to Battamalloo and demanded that perpetrators be brought to book and families be given justice.

It was also resolved that the party stands by thousands of youngsters of Kashmir who are routinely harassed and humiliated at the hands of security forces and other agencies by means of wrongful cases against them, random arrests, and curbs even on the right to express themselves. Such actions against our youth are unacceptable and would be resisted.

The meeting condemned the targeting of the journalistic fraternity of the state wherein a case is being registered at the drop of a hat for merely reporting the facts of the ground. All this is being to threaten and muzzle the independent voices.