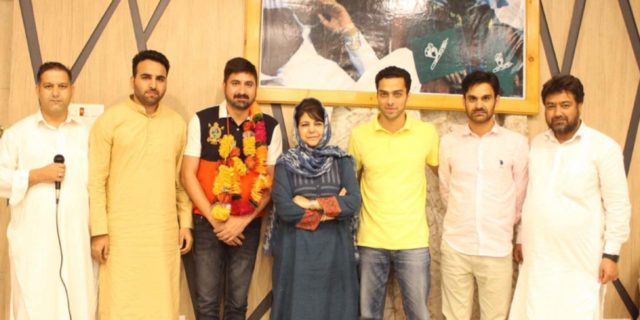 Stressing on the need to initiate youth specific CBMs party President highlighted the initiatives taken during the tenure of PDP government. Stating that youth holds the baton to change the political destiny of the state, Mehbooba said, that PDP is the only credible and viable political platform for the youth of the state providing platform of inner party democracy. She said that the inclusive participation of youth in the political process will decide the fate of the state.

Welcoming prominent social activist Mohit Bhan into the party fold, she hoped that the composite culture of the state will find back its true essence with the dignified return of the Kashmiri Pandits. Mehbooba on this occasion urged the union government to instill a sense of confidence in the youth of Kashmir by reaching out to them in a dignified manner.

” Youth of Kashmir are yearning for a healing touch. Developmental packages alone won’t work. Their sensitivities and aspirations should be addressed” said, Mehbooba.

On this occasion, Mehbooba extolled the youth of Kashmir for rendering selfless service and contribution in reshaping the political landscape of Jammu & Kashmir through their active participation and society building.

Many prominent youth leaders also put forward suggestions for strengthening the party at grassroots and bringing out the state from the vortex of uncertainty.